The Hapkido World Seminar 2014 Asia was held on October 4th and 5th at Sun Hapkido Academy Singapore (SHAS). The event was conducted by Grandmaster Hong Sik Myung, and his son, Secretary-General, Master Roe Min Myung from the United States. There were over 35 participants for the event, including overseas guests from Japan and the Netherlands. The distinguished guests were Master Martin Zingel (6th Degree Black Belt) & his son, Mr. Marwin Zingel from the Netherlands, Mr. Kenichi Nonaka & Ms. Jules Takagishi (Taekwon-Do practitioners) from Japan, and Mr. Riki Young from Shitoryu Karate Singapore. 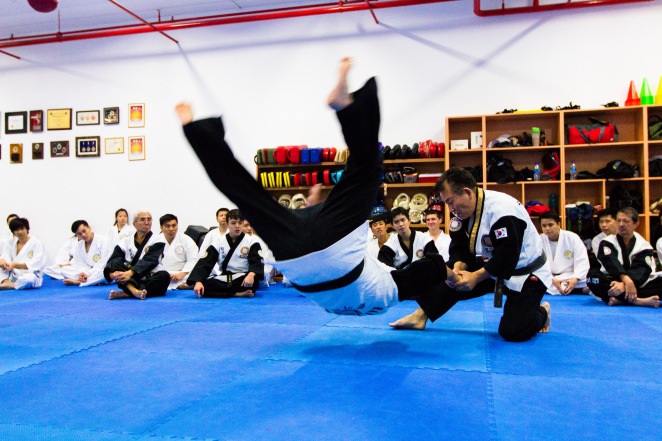 This was the first time that SHAS has organised the seminar with Grandmaster Myung, and also my first time attending a Hapkido seminar. On the first day, the Grandmaster was esteemed with an energetic lion dance followed by brief speeches by Master Daniel Sng (President of SHAS) and Grandmaster Myung. At first impression, the Grandmaster came across as a patriarchal figure, patient and passionate; “A man who is willing to impart and impart” mused Mr. Chiam. After that, we lined up and looked our best as we posed for group photographs.

Each day was typically split into two sessions, morning and afternoon, sundered by a two-hour lunch break, and a shorter 10 minute break in each session. We began each session with light warm up, which was a combination of stretching exercises, jumping and dynamic leg exercises. During the morning session on the first day, Grandmaster Myung addressed the Danjun Ho (breathing exercise). He highlighted that the Danjun Ho should be done with focus and slowly, allowing the “qi” or energy to sink down to the abdomen and slowly breathing out. He added that doing this properly was one of the important components in Hapkido.

Throughout the sessions, Grandmaster Myung demonstrated a myriad of techniques before dismissing us to practise them with a partner. These techniques emphasized on practicality as well as precision in the execution. They involved the grabbing of the wrists, grabbing of the lower, middle and upper sleeves, and the collar too. One important aspect that Grandmaster Myung pointed out was that, the techniques were an end to itself in Hapkidowon. He commented that occasionally techniques were tainted with variations that were unnecessary.

Values, discipline, principles and techniques go together in Hapkidowon, and that differentiates us from other Hapkido schools, I recalled Grandmaster Myung remarking. “For instance”, he said, “the eight arrows on the logo points outwards in different directions. The techniques can be rendered anywhere, in any direction”. Moreover, throughout the seminar, with different volunteers, the Grandmaster stressed that the volunteer’s idle hand should always be stationed by the side with palm opened. Among the volunteers, four participants namely Mark, Harris, Hock Ann and Jonathan Sir were instrumental in our learning. Although they were tossed and thrown more than anyone else, what is commendable is their grit and attitude. I overheard Grandmaster Myung quipping, “I do the techniques on you so that you know it works, too soft and you won’t learn. Also, I am controlling the force.”

Towards the end of the second day, Grandmaster Myung and his son demonstrated sparring with Dan Bong (short stick), and a bamboo sword, much to the delight of the participants. By the end of the two-day seminar, although everyone was exhausted, and had sores and bruises, there was an aura of gratification. We were rewarded with an invaluable wealth of knowledge and a more tangible diploma certificate presented by the Grandmaster. Perhaps the more momentous occasions were the privileged autograph session followed by individual photographs taken with Grandmaster Myung and his son.

The eventful seminar was concluded by a dinner, which saw a contrasting sight of refreshed faces paired with the donning of smart suits and elegant dresses, at Spring Court Restaurant. The nine course meal was interspersed with presentations of appreciation plaques, gift exchanges with the foreign guests and performances. The crowd was bowled over by the powerful vocals of Sijian and Kartik, who displayed their flair in four songs, in Korean, Mandarin, Japanese and English. Each song, as Sijian explained, is related to martial arts. For example, the song I Believe, which he sang in Korean and Mandarin relates to the belief in oneself to move forward despite difficulties.

On account of all participants, I would like to thank Mr. Jeremy Tan for his tremendous time and effort put in the events. He had painstakingly organised not only the seminar and dinner, but also the recreation activities for the Grandmaster and other guests. Unequivocally, we are grateful to Master Sng for being the Chief Organiser, inviting Grandmaster Myung to Singapore and equipping the Dojang for the seminar. Echoing the sentiments of Haris (and other participants), “Training together side by side, we all developed a stronger camaraderie within the Sun Hapkido family, while building lifelong ties with our new friends from the Netherlands and Japan. Despite the long hours of training, we were all smiles at the end of the seminar. Truly an experience I’ll never forget.”